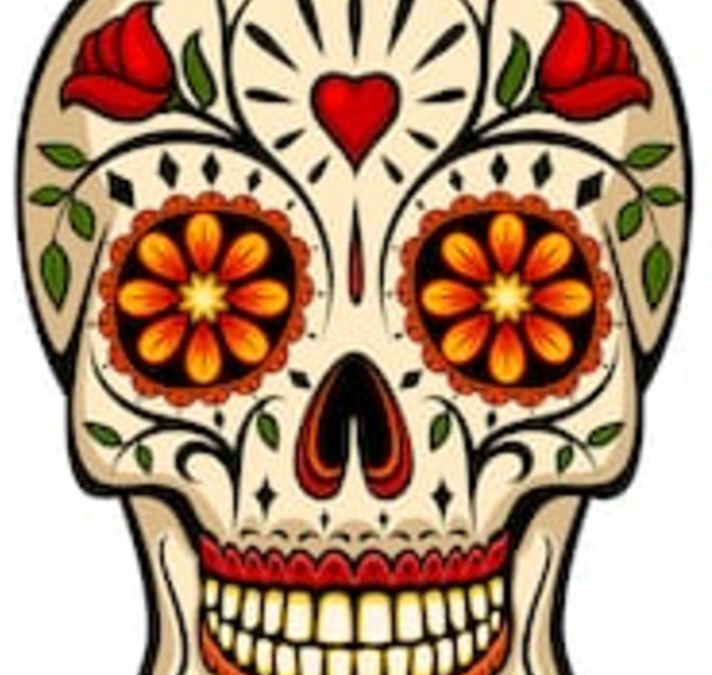 Whilst studying Ancient History one of my modules was on ‘Death and Burial’ – sounds a little morbid but it was actually truly fascinating and of course… flowers and their symbolism featured greatly throughout.

It really opened my eyes to how different cultures all over the world view death and how features such as colour or tokens such as flowers play such a dominant part in how we as humans both interpret and mark death.

Intriguingly, most people in the UK associate the colour of death as black for example the typical representation of the grim reaper in his dark, hooded cloak appearing with his scythe. On the other end of the spectrum, some tribes in Africa in the dessert terrain believe the colour of death is white, as it represents bones bleached by the sun. Their warriors even paint themselves entirely white emphasising their ideology that they are the bringers of death.

Then there is The Day of The Dead, or Dia de los Muertos, in Mexico. It is a huge, vibrant and colourful celebration where there is an abundance of flowers, predominantly that of the bright orange marigolds, used throughout the festivities. Marigolds, also known as the flower of the dead, are believed to represent how fragile life is and how it should be celebrated.

The Ancient Greek Messenger Goddess of the Olympian Gods and of the rainbow, ‘Iris’ or ‘Eiris’ was believed to use the rainbow as a passage between heaven and earth linking gods to mortals. Hence how the Iris flower was given it’s name, with it’s immense variability of colours it is an apt representation of the Ancient Greek Goddess’ rainbow. As a result, many people plant Iris in memory of their loved ones so they can keep the channel of communication open.

But where did the concept of offering flowers at a funeral even begin? Rather gruesomely flowers were used because they served the crucial purpose of masking the odour of the deceased. It was from there that the gifting of flowers developed into a visual representation symbolising various emotions such as sympathy and love.

Sometimes a single flower can have multiple meanings depending on the situation. Take the Lily for example; it is one of the most adaptable blooms. It is believed to represent the soul of the departed which has received restored innocence after death and so is strongly rooted in funeral flowers. In contrast, lilies also stand for devotion. The Chinese ideology that lilies are connected to 100 years of love and good luck make it a sort after flower for weddings. It is even the universal symbolism for 30 years of marriage.

How you interpret a flower’s symbolism means you can use it in different ways too, both positively and negatively. A flower can hold different meanings across time periods and cultures. Chrysanthemums originated from China, as early as 15th century BC. When its popularity grew into Europe, Austria use it now, almost exclusively, as a memorial flower in honour of loved ones. However, in Italy the flower is linked to ‘All Souls Day’ on the 2nd November and they believe it represents great sorrow as they bloom at the same time. As a result many Italians feel that to offer a chrysanthemum is to give the gift of death, not a mistake in cultural etiquette one should make!

That is just a tiny snippet into the kaleidoscope of flowers used in the representation of death throughout various cultures, eras and ideologies. Who knew the subject of death could be so enlightening?!