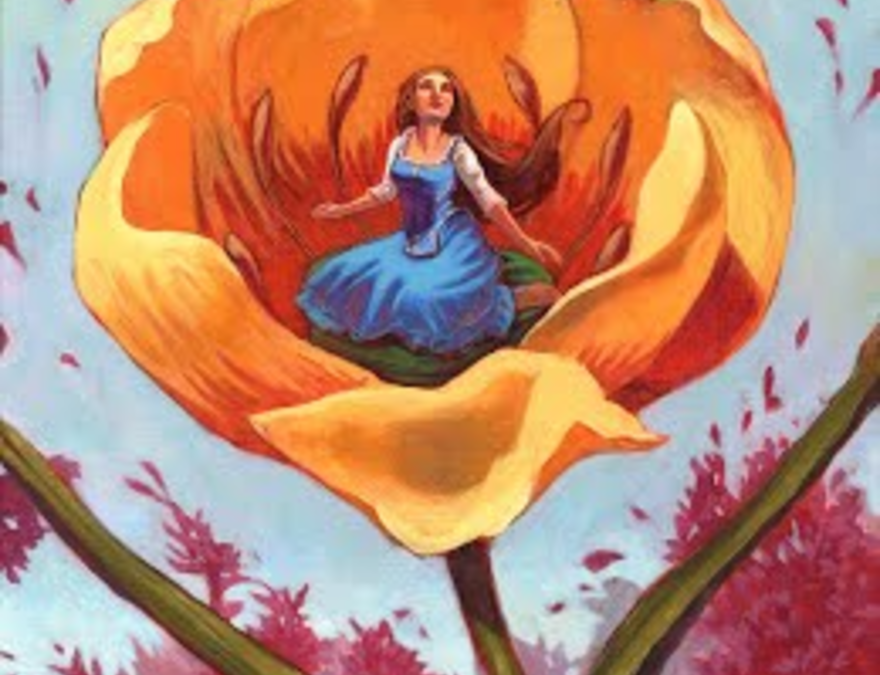 Daisies close up at night-time and wake up with the sun, anemones bud up when they sense a storm, sunflowers follow the sun’s path all day with their big, bright faces, and buttercups can tell if someone likes butter or not! Ok – so we may be stretching it a little there, but it’s always worked with me… and I do love butter.

Not to mention that flowers can literally grow anywhere, and everywhere, wherever they please. Have you seen the classic photo of a flower emerging through concrete? I once heard a fantastic saying ‘There is no such thing as a weed, just a misplaced flower’.

Lets face it, flowers are pretty darn magical! So it’s no wonder that they feature avidly throughout fairytales. Hans Christian Anderson and The Brothers Grimm, as well as many other authors, have countless stories where flowers are used for their beauty, their fragility and their strength, their enticing scent and of course their meaning.

In the wise words of Anne Bronte
“But he that dares not grasp the thorn, should never crave the rose.”
Over the years, many fairytales have been adapted, however in The Grimm’s version of ‘Sleeping Beauty’ whilst ‘Aurora’ is growing up in disguise she is known as ‘Little Briar Rose’. Once she pricks her finger on the spindle and falls into a deep sleep, thorny briar roses grow all around her for protection. It is only the one handsome prince brave enough to tackle all these thorns that eventually makes it to her side to kiss her awake and break the enchantment.

Snow White’s beauty is compared to pure elements, the first obviously being her skin as white as snow, then there is her hair as black as ebony wood. Again with the many variations of fairytales her lips are often described as being ‘red as blood’. However when Disney adopted the fairytale, to make the Grimm’s Brother’s version a little less… well… grim for want of a better word… they changed it to ‘lips as red as the rose’. I am sure makeup designers have strived ever since to produce a lipstick to capture such a classic colour from such an iconic bloom.

In Hans Christian Anderson’s Thumbelina, a beggar woman exchanges barleycorn with a peasant’s wife for some food. The wife plants the barleycorn and a flower grows from it. Now the wife had been desperate for a child and as the petals of the yellow and red tulip unfurl, a tiny, little girl is revealed. The woman calls her Thumbelina. The Tulip has been a strong symbolism of love and the Victorians also linked its meaning to acts of kind charity. The Turkish people who originally planted the bulbs believe the Tulip symbolised paradise on earth – all rather apt meanings considering the fairytale revolves around charity, love and being granted a precious gift you’ve always wished for.

Of course, I can’t forget ‘Beauty and the Beast’, a childhood favourite. An enchantress disguised as a beggar woman knocks on a spoilt Prince’s castle door for some shelter offering but a single rose in payment. The Prince scoffs at such a fragile, ephemeral offering and turns the beggar woman away. Little did he know that she was a witch and in punishment she turned him into a hideous beast, the furthest thing from the beauty of the rose. The rose she gifted became his curse. All fleeting beauty of a cut flower vanished and was replaced with a decade of life. She gave him until the final petal fell to find true love and break the enchantment. Well if THAT isn’t a magical flower, I don’t know what is!

Flowers are certainly powerful, magical things. Their language, their appearance, their ability to evoke emotions is truly that of fairytales.